The Quanta in Philosophy and Culture

But quantum mechanics is not only strange and complicated. It also forces us to revise the mental patterns to which we are accustomed, testing our beliefs and offering new answers to the questions that philosophers have been asking for millennia.

Does the universe exist independently of us? Esse est percipi: : things, to exist, need to be perceived. He argued in ‘ 700 the British philosopher George Berkeley, that a ball or a tree does not exist in itself, regardless of us: those we perceive are the sensory stimuli that come directly from God.

And the German philosopher Immanuel Kant, also in ‘ 700, had reiterated that one cannot know the world “as it is in itself” (defined by him Noumeno), but only “what appears”. Something like that, two centuries later, says quantum mechanics: To determine the position of a particle, for example you have to illuminate it… And then the particle, struck by the light, squirts away. We know where it is, but not where it will be after a while.

To observe reality, in short, we must “disturb”: “according to the interpretation of Copenhagen,” explains Giulio Giorello, professor of philosophy of science at the State University of Milan “quantum events depend on the presence of the apparatus of Remark that must measure them. ”
Einstein could not digest this aspect of the theory: he was convinced that reality was well determined and independent of the Observer. But today the experts are in favor of the interpretation of Copenhagen. 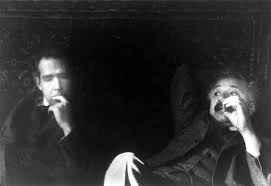 Niels Bohr and Albert Einstein, two fathers of the theory. It was in one of their discussions about the physical significance of quantum mechanics that Einstein uttered the known phrase: “God does not play dice.” Bohr brilliantly disdid all of Einstein’s criticisms, but he never fully convinced himself of the probabilistic nature of the quantum world.
Einstein could not digest this aspect of the theory: he was convinced that reality was well determined and independent of the Observer.

What if the effect preceded the cause? One of the pillars of classical science is the rule according to which, in the world in which we live, every cause necessarily follows an effect: if I throw a stone at a window I break it, if I touch the fire I burn. In ‘ 700, the Scottish philosopher David Hume questioned this principle: even if every day two events follow one another, we must not consider this link as a logical consequence, because it could be an association of our ideas Determined by habit.

Does our essence extend to the whole universe? When we surf the Internet, the space seems to be sucked by a mouse click, within hyperlinks between systems that are thousands of miles from each other. In the subatomic world, under certain conditions, the same thing can happen: there are “twin” particles, tied together by the property of entanglement, which, while being in opposite points of the universe, could communicate instantaneously with each other, acting As a whole.

This phenomenon, now proven, demolished one of the pillars of traditional physics: the principle of locality. So much to give rise to a doubt: do we live in a whole indivisible, dynamic, whose parts are interconnected as claimed in ‘ 600 the Dutch philosopher Baruch Spinoza?
According to his “pantheistic” vision, there is a unique and infinite substance, a geometric order in which God and nature coincide (Deus sive natura, “God, or nature”) as an internal cause to the whole.

The void does not exist

It is only an illusion. What seems empty, separation between one object and another, is an energy field, not only, it is also a field of consciousness. If this were not the case, subatomic particles could not perceive the same information instantaneously, even at sidereal distances. Since then a speed higher than that of light cannot exist, we must think that the particles are aware of the existence of an interconnection between them. We are made of quantum energy and now we know that the quantum energy can manifest itself as a wave or as a particle. It can exist in a particular place or it can be simultaneously in 2 or more different places in total interconnection. I, you, but also others are able, as observers, to intervene and modify the particle in the present. In this way we create reality and our future. The quanta represent our infinite possibilities. Question: What is the force that keeps the quantum particles of our body in entanglement? Answer: Consciousness. The very strength through which the matter we know is generated and exists.

“Behind this strength there is a conscious and intelligent mind. This mind is the Matrix, the matrix of all matter. “

Although classical physics, influenced by the Cartesian model, tells us that there is no possibility that the mind can affect matter, quantum physics shows us instead that it is possible. Our mind is able to influence the reality we see.
In Japan there is a researcher, Masaru Emoto, who has developed a technique to analyze and photograph under a microscope the crystals that form during water freezing. Emoto did not limit himself to this, he showed that water, exposed to music, words and thoughts, crystallized in different forms depending on the messages received. – Water crystals exposed to words of love, prayers, water from Lourdes , violent words. –

Question: if thoughts have a similar impact on water, do you imagine what they can do to us that we are composed of 70% water?

Thoughts and emotions also influence plants. We want to remember the experiments of Cleve Backster. Backster was an FBI expert on the truth machine in the 1970s. One day, while he was checking the polygraph, he had the idea of testing the Dracena (plant) of his office.
The intention was to measure the variation in electrical conductivity of the leaves of the plant due to the watering. He bathed the Dracena, sure to get an increase in conductivity. Instead, he drew what appeared to be a human response on the polygraph chart.

“The outline of the nib was not what I expected from the water that entered the leaf,” said Backster, “but rather, what I expect from a person who lies, subjected to the truth machine.” Backster insisted:

He only imagined burn the leaf to which he had applied the electrodes. His mental image was enough because the Dracena almost went mad with fear: the nib jumped up and down the track.
Thoughts and emotions also influence DNA.
Imagine that a doctor takes a blood sample from you … Imagine then that you extract the DNA from your lymphocytes and isolate it so you can observe it under a microscope on a monitor. Consider that the observation takes place in a laboratory away from the place where you are. Here you are subjected to a series of emotional stimuli. If your mood is negatively stressed, the histones of the DNA (positively charged proteins) will change their structure by contracting and the DNA will be shortened. If the stimuli are positive, the histones will not contract and the DNA will be longer. Everything will happen instantly as if there were no separation between you and the removed DNA.

“Thought is vibration, energy”
Thoughts are not particles, they are waves, and waves intertwine with each other. Thought is the only useful tool for knowing reality, since reality is all thought. It is non-local energy, although it has always been thought that thought is located in the head. The brain is not the brain, it is the factory of thought. A radical change of mentality is necessary. We no longer have to think about reality in terms of materiality. If this were the case, we would be really insignificant, we would have no way to intervene on reality except with the only mass Cartesian method. If on the contrary, I am convinced that reality, my reality, is a possibility of conscience, so I am able to ask myself how can I change it, but, above all, how I can improve it.

Vibration as the origin of the Whole: from string theory to DNA
Scroll to top