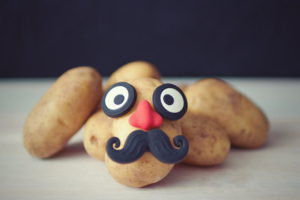 Native to the Andes, the potato was domesticated in the Lake Titicaca region and became one of the main foods of the Incas, who developed a large number of varieties to adapt it to the different environments of the regions they inhabited.

The first Europeans to learn about the potato were the Spanish conquistadors of Peru: the first written description of the plant dates back to 1537.

The potato arrived in Europe around the middle of the 16th century: it was reported in Spain in 1573, a little later in the Netherlands and Italy (then Spanish possessions), in England in 1588 (brought there by Walter Raleigh), in Germany at the end of the century. In Italy it was called “tartuffolo” or white truffle.

Present in botanical gardens, for a long time its importance in agriculture and nutrition was marginal, and it was considered a food mainly suited to animals.

Several factors played against the spread of the potato. The first varieties imported from South America were unsuitable for cultivation in European climates and yielded poor harvests. The tuber’s deformed and irregular appearance was strange and unsightly to Europeans of the time, and some herbalists suggested that it could cause leprosy. 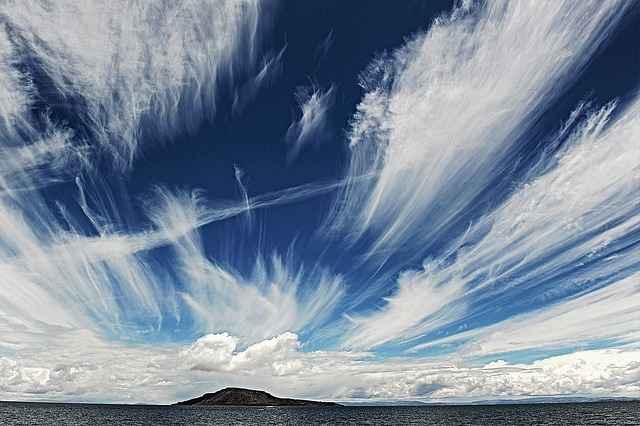 Healing Properties and Benefits of Potatoes

The potato is a foodstuff that is very rich in substances with properties that can benefit our organism; the abundance of potassium it contains is very useful in cases of hypertension, it also contains trace elements and minerals such as sodium, magnesium, calcium, phosphorus and iron.

In natural medicine, the potato is highly valued not only for its beneficial effects on human health, but also for its versatility.

In general, it has a purifying effect and retains many of its active ingredients even when cooked.

Potatoes contain about 79% water, 15% starch and the remaining percentage is divided between ashes, sugars, fats, proteins and dietary fibre. Potatoes contain a very good percentage of potassium, in addition to phosphorus, calcium, sodium, magnesium, iron, zinc, copper and manganese.
Potatoes contain the following vitamins: B3, B5, B6, vitamin C, K and J. Sugars are divided into saccharose, dextrose and fructose. Among the amino acids, those present in greater percentage are: aspartic and glutamic acid, leucine, lysine, valine, arginine and serine. 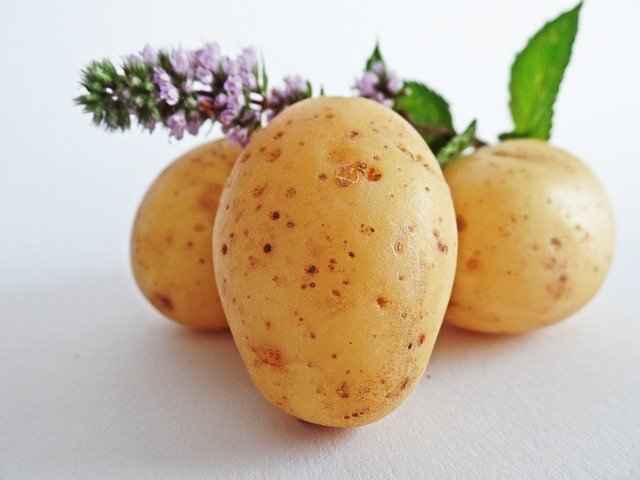 The juice of the potato, because it neutralises the gastric juices, is useful in case of stomach pains and gastritis;

the potato also has a depurative effect and the potato water is able to purify the intestine and eliminate toxins from the body.

To obtain potato water with purifying properties, all you need to do is get a potato, wash it, carefully cut it into small cubes (taking care not to remove the skin) and soak them overnight in a quarter of a litre of salted water.
After straining, drink a glass every morning on an empty stomach.

in fact, its high potassium content helps the body eliminate excess water. Many substances with healing properties are contained in the skin, so it is best to cook it whole, in the oven or steamed, and eat it together with the skin. To combat water retention, a potato diet is recommended: For 2 days, eat 200 grams of unsalted potatoes 5 times a day, cooked in their skins, and drink plenty of water.

The high potassium content helps eliminate water retention and with it waste and toxins, thus purifying the blood.

Potatoes can also be eaten by diabetics.

They are not only useful in cooking, but also for beauty care and skin care in particular: the pulp of this tuber, for example, can be used to make face masks that nourish and soften the skin. But that’s not all. 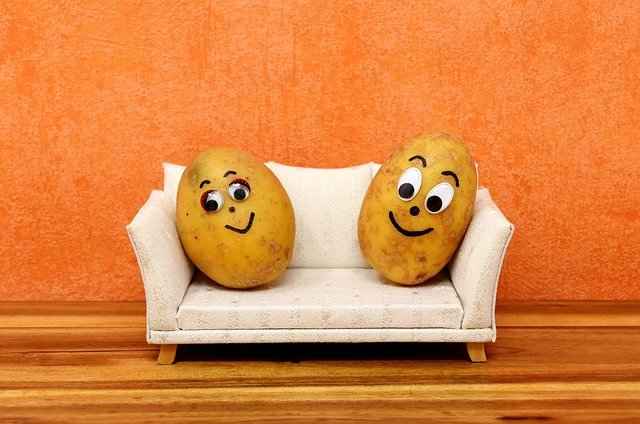 Like I said before they are a source of minerals, fibre and vitamins (particularly C and B) and have an anti-inflammatory and soothing effect on reddened skin: just grate one and apply it to the affected area for relief. It has emollient and moisturising properties, being composed mainly of water.

Don’t throw away the water from cooking potatoes because it can be a great remedy for the skin of your hands: by keeping them immersed for a few minutes, thanks to the action of the starch and potassium, they will become softer and smoother.

One of the most effective natural remedies for dark circles under the eyes or puffy eyes, which are the result of a few hours of sleep and stress, is a slice of potato left on the area for about 30 minutes.
It purifies the skin, eliminating blemishes such as acne and blackheads.
Useful for small wounds and burns.
Healing of bruising. 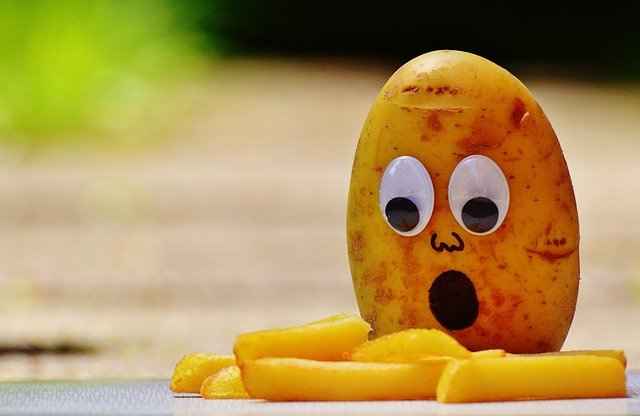 It seems that potatoes, contrary to popular belief, are not at all an enemy of the waistline.

On the contrary, there are at least seven good reasons to consume this food safely even during a slimming diet; in fact, potatoes, as well as being low in fat and cholesterol, also provide a good quantity of vitamins and mineral salts and are formidable allies of our health.

However, this is only possible if they are cooked in a healthy way and are not overly seasoned.

High energy Potatoes are made up of 20% complex carbohydrates, i.e. those that the body absorbs slowly and provides energy over many hours.

Cholesterol under control The starch contained in potatoes reduces cholesterol and lowers the level of triglycerides in the blood Fair amount of protein Potatoes are among the vegetables with the highest protein content (2%). However, this protein is easily lost when potatoes are cooked, which is why potatoes should be eaten in combination with other protein-rich foods such as fish, rice and pulses

Full of vitamins Potato flesh is very rich in vitamins B1, B2, B6 and, especially in the yellow varieties, provitamin A. Vitamin C, on the other hand, is largely contained in the skin; therefore, roasted or boiled potatoes with the skin retain their content to a large extent….and minerals Potatoes contain iron, zinc and phosphorus and boast a potassium content equal to that of bananas. 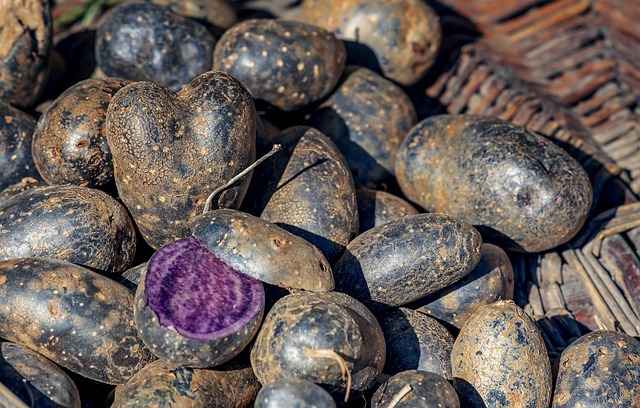 They are naturally rich in anthocyanins, pigments that possess antioxidant and anti-radical activity (helping against ageing processes, inflammatory processes and cancerous changes).

According to scientists, the quantities of anthocyanins found in the analyses are very high: as much as 100 mg per 100 grams of violette potato. Researchers attribute to these substances a real “sweeping” role in ridding the body of free radicals responsible for premature ageing. These substances are present in many foods (including blueberries, currants, raspberries, red grapes and aubergines), but the violette potato is said to contain far higher quantities.

Rice with potatoes and mussels :

Tiella of potatoes and codfish: